Customers are very important for every shopkeeper and the latter does a lot of things to attract the customers but sometimes things turn ugly when the shopkeepers resort to violence in regard to this matter.

A video is going viral on the Internet in which some people are seen fighting in a brutal manner with sticks and rods. This incident took place in Atithi Bhavan market area, Baghpat district, in which two chaat stall owners and their workers got embroiled in a fight. It is being said that the fight lasted for around 20 minutes and the video was shot by a person present over there. 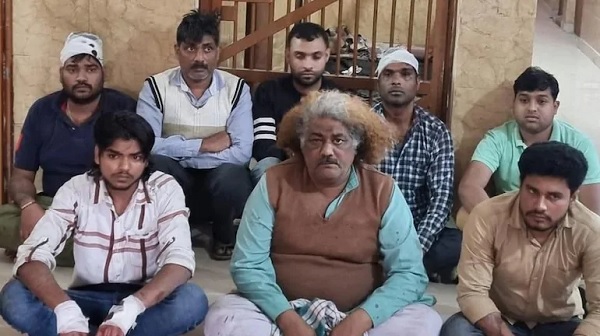 The Baghpat Police also came into action soon and arrested 8 people from both sides. Though 12 people have got injured in the fight, no one has sustained serious injury. A police official also stated that the dispute over attracting customers escalated into a fight between the two chaat vendors.

Here is the video clip of the fight:

The Internet was in splits after the video went viral not because of the fight but for the red haired uncle who seem to be a mix of Dr. Mashoor Gulati, scientist Albert Einstein and Virus from Aamir Khan starrer “3 Idiots” movie. The name of red haired uncle is Harvinder and he has been running the chaat stall for many years now but now he is getting competition from the new chaat stalls.

While speaking to ANI UP, Harvinder reveals that the new chaat vendors are spreading fake information about the quality of his chaat and asking people not to eat at his stall because he is selling stale products. The other chaat vendors also came up with mobile units near Harvinder’s stall and tried to steal his customers.

#WATCH | The man seen in the viral Baghpat brawl clip explains reason for the fight. The man is now in jail, this interview is from last night pic.twitter.com/PII1Rb5OvX

The video helped the police a lot in identifying people involved in the brawl. On the other hand, Twitter came up with funny memes on uncle from Baraut and here are some of the selected reactions:

When teacher When she’s
leaves class back after 5min pic.twitter.com/dJSeRDwbjl

Online shopping –
What you order vs what you get pic.twitter.com/SAfZ4iCDUG

Who knew that our childhood favourites would one day become real? :’) What amazing casting for Blanka!

Hopefully, these chaat vendors will not resort to unethical ways to attract customers now.